During the time of the Prophet Muhammad (PBUH), the mosque played a pivotal role within the Muslim community. Besides being a place where Muslims congregate for prayers, the mosque also served as an important community centre – a multifunctional institution for various political and non-political purposes such as learning, upholding justice, settling disputes, rehabilitating prisoners and tying the knot. Thus, the mosque is integral to the development of the Islamic community, culture and civilisation all over the world, including Malaysia.

In Malaysia, mosques can be found in almost every town and district in every state. Throughout the country, the azan or the call to prayer can be heard miles away from these mosques five times a day. During the early days, the azan is preceded by the sounds of the ‘beduk’, a traditional percussion instrument, indicating the arrival of prayer time. Some village mosques still employ this traditional method.

The architectural styles of the mosques in Malaysia are interestingly diverse. Some are inspired by the world’s greatest mosques, while others adopt the classic design of traditional Malay architecture. A majority of them incorporate local elements and design motifs. Some of these mosques are globally recognised for their unsurpassed beauty; some – such as Terengganu’s Crystal Mosque and Perak’s Ubudiah Mosque – have even made it into the list of the world’s most beautiful mosques. Malaysia is also home to reputedly the oldest mosque in the region, Kampung Laut Mosque, which is believed to be at least 250 years old.

Malaysian mosques are as much a tourist attraction as a place for Muslims to congregate in prayer as some possess significant historical value while some are simply stunning works of art. Going on a mosque trail here is truly a feast for the eyes and a pleasure for the senses.

Masjid Kampung Kling is located within the vicinity of the infamous Harmony Street, where houses of worship from various religions harmoniously coexist. Built in 1748 – like many Malaccan mosques built around that period – it displays strong Javanese and Oriental influences in its architecture. The mosque was reconstructed and renovated in 1872 and 1908 to replace the original wooden… 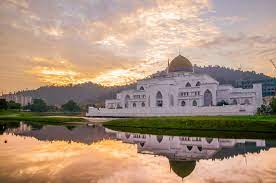